The girls do it again…

The girls do it again… 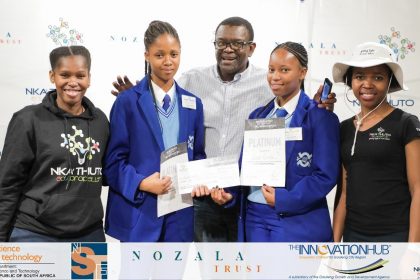 After winning at the final Innovation Expo in September 2018 and also being selected as 1 of 10 projects to go through to the final stage of the Nka’Thuto program, the TechnoPreneurship workshop, the girls did it again. They were tasked to convert their solution into a business case. To assist them they we allowed to grow their business by adding another member. The 3rd member of their team became Kamogelo Sihlangu (16), another grade 11 bright spark from Ivory Park Secondary School in Johannesburg, Gauteng. Together the trio worked like a charm from the beginning of the TechnoPreneurship workshop which commenced on the 1st of December and drew to a close on the 7th of December 2018. The trio took on all the challenges presented to them during this grilling week of early mornings and late nights. Each day the trio had to take in new knowledge and business principles which they had to apply to their technology to develop a business case. They learnt and had to apply concepts of design thinking and the business canvas model to their solution. The girls were never caught in a dispute and always carried themselves as absolute champions, giving each other tasks and working well as a team. Even when one of their team members was not feeling well, they covered for each other as a team and displayed exceedingly high levels of professionalism and hard work.

Following the various lecturers they attended which were presented by entrepreneurs in different sectors of business and invaluable mentorship from entrepreneurs they were going to be vetted on the merits of the business cases. The test of their hard work was judged by an esteemed panel of judges from the investment and business sectors including Nozala Trust, Global Health Technologies and the Industrial Development Corporation during their pitch of their tech start-up. The name of their company is SUESS and their logo and slogan are captured in the image below:

Not only have these learners walked away with the both the Ultimate Innovation Prize at the Final Innovation Expo and the Ultimate TechnoPreneurship Award, they were also voted by the judges as 1 of 2 teams with the best pitch presentation. Amongst the Panel of judges was also the Deputy Dean of the Faculty of Science at the Tshwane University of Technology who was so impressed by the SUESS trio that she invited them to be the key note speakers at the TUT Research Day in 2019.

Their pitch was carefully thought out and the objectives of their technology laid out as follows:

Their value Proposition is, “SUESS delivers sustainable clean water and reliable energy through greener engineering”. And their target market are private investors such as property developers, private schools and farmers. The proceeds will be used to build the system in previously disadvantaged schools situated in township and rural areas.

They identified their competition as the government sanitation system which they believe has challenges such as overloading and proximity to some markets on the outskirts. They believe their system to be advantageous as it is located on the premises or in close proximity and does not overload due to its continuous nature.

The technology is going to be evaluated and thorough feasibility conducted towards bringing this technology and business concept to life.

Joy Mathabatha is planning to be an engineer